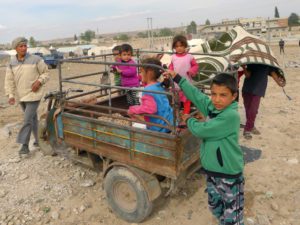 In a story for The Intercept, Roy Gutman interviewed four Syrian deserters from the Kurdistan Workers Party (PKK) who recounted recruitment at gunpoint, recruitment of child soldiers, jail terms for relationships with women, sending conscripts to the front lines, and conscripting family members to replace deserters. The PKK – an ally in the U.S. fight against ISIS in Syria – restricts media access, so Gutman interviewed the four in northern Iraq.

The four also spoke of the PKK as a movement – one that is listed as a terrorist organization by both the U.S. and E.U. They say its decades-long armed struggle for an independent state has not improved the lot of Kurds in Turkey, Syria, Iraq, and Iran. Reinforcing that thought is an interview with Osman Öcalan, the brother of the jailed leader of the PKK, and a founding member who also deserted the group, 15 years ago.

PKK-led Syrian Democratic Forces forced this family to flee Jarablus in in advance of the American bombing in Raqqa, Syria. Photo by Roy Gutman