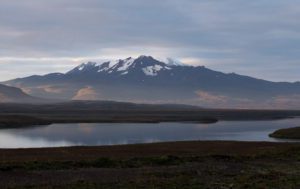 A year ago, the Trump administration approved a land swap allowing a road to be built through a remote national refuge in Alaska. The road was supposed to be a route for evacuating sick people from a small Aleut town. But an investigation revealed a little-known loophole in the agreement that allows for transport of millions of dollars of seafood.

Grant recipient Jane Kay and photographer Ash Adams explore the impact of the road on wildlife and the people of King Cove in an article for Reveal.

At the personal urging of President Trump, the Interior Department ignored two federal reports saying the road would harm irreplaceable, extraordinary wilderness and that patients could be transported via water instead. Interviews and documents obtained by Kay show that the intent of local leaders was to link its harbors to ship fresh fish. The agreement allows the road to be used by small businesses, which can sell tens of millions of dollars in seafood yet still qualify as “small.” Local leaders pushing for the road all own commercial fishing boats.

Frosty Peak, more than a mile high, looms over Izembek Lagoon in the Izembek National Wildlife Refuge. Photo by Ash Adams for Reveal