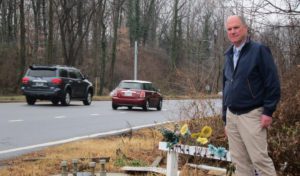 State and local secrecy is on the rise but gets far less attention than similar issues at the federal level. The public’s ability to gain access to public information is often hampered by state and local governments themselves. In a five-part series for Reveal, the Center for Investigative Reporting, also published by Gannett newspapers and USA TODAY, Miranda Spivack showed the damaging effects of state and local secrecy. Many states, relying on an obscure federal law, withhold documents, data and reports on dangerous roads, bridges and intersections. In a related piece, she illustrated the harmful effect when private contractors gain control of public records such as court documents and crime data, limiting access and reselling information, sometimes at exorbitant prices.

[In photo: Richard Boltuck, an economist who lives in Bethesda, Maryland, stands near his home at a makeshift memorial for three family members who were killed in 2016 at the accident-prone intersection. Boltuck has been lobbying the state for information about the intersection’s dangers for eight years. Photo by Stephen R. Herm for Reveal.]