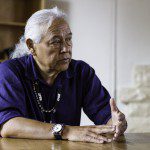 Reporting for Indian Country Today, 100Reporters.com, and NBC.com, Stephanie Woodard begins a series on young Native Americans who commit suicide, and the efforts to prevent those deaths.

“Native teens and twenty-somethings are killing themselves at an alarming  pace. For those 15 to 24, the rate is 3.5 times that of other Americans and rising, according to the Indian Health Service (IHS). Tribes have declared states of  emergency and set up crisis-intervention teams. The federal government included  10 tribes or tribal organizations in a recent round of 23 youth-suicide prevention grants; most will receive nearly $500,000 per year for three years.  That brings to 43 the number of indigenous groups that have received this  funding.

“That’s good, but hardly enough, says former North Dakota Senator Byron  Dorgan, who chaired the Senate Committee on Indian Affairs for four years. Since  leaving the Senate, he has founded the Center for Native American Youth (CNAY),  which promotes Indian child health, with a focus on suicide prevention. He claims the IHS, which serves the nation’s 566 federally recognized tribes, is chronically underfunded. “We need more mental-health funding and services to save the lives of our youngest First Americans,” Dorgan says. “Tribes and  nonprofits may get two- or three-year grants to address an issue that cannot possibly be resolved in that amount of time. We fund programs, then let them fall off a cliff. The perception may be that tribes have a lot of gaming funds,  but that is simply not true for more than a few.”