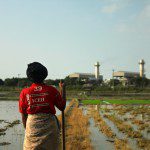 Writing for Mother Jones, and the Dallas Morning News, Ian Shearn and Laird Townsend report on a legal case with broad implications for human rights, involving American companies that conduct business in foreign lands. A Supreme Court ruling could open the door for ExxonMobil and other multi-national companies to face trial on human rights allegations.

Shearn and Townsend report: “As the Supreme Court grapples with its decision, ExxonMobil is in the process of pulling out of Aceh, abandoning the dwindling reserves of  the Arun gas facility. But losing or settling the case wouldn’t noticeably move ExxonMobil’s considerable bottom line. Of more concern might be the negative fallout that comes from being publicly associated with atrocities.

“You would think that ExxonMobil doesn’t care,” says Marco Simons, legal director for the advocacy group EarthRights International, who filed a brief for the plaintiffs in the ExxonMobil case. “But this matters to even big oil companies. They face a tremendous vulnerability to their reputation, not unjustifiably, but because the evidence shows complicity in series of abuses. Directors do not want to be associated at cocktail parties with mass graves in Indonesia.”  Read the full article here. And visit Project Word  for comprehensive coverage of the issue.