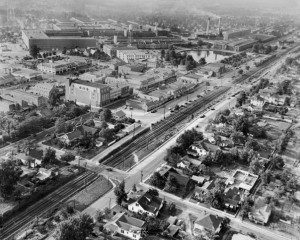 Amanda Wilson has the story of a North Carolina town that found new purpose after the Cannon towels mill shut down. That is: supplying human subjects for medical research projects far into the future. For Pacific Standard, she reports:

The [Duke University] spinoff is a joint venture with LabCorp, one of the largest clinical lab testing firms in the U.S. In the partnership, Duke brings biological material to the table—20 percent of the samples from the MURDOCK Study—and LabCorp brings cash: $24 million. The goal of the new company is to rapidly turn discoveries from the MURDOCK Study into intellectual property and lab-test products.

IF THOSE PRODUCTS GO to market and are successful, it will no doubt be good for Kannapolis; one way or another, some portion of the profits will probably filter through the town’s economy. But it’s not exactly clear how. A generation ago, the average Kannapolite derived a sizable share of the prosperity generated by the mill. How much will the average Kannapolite share in the prosperity of ventures like the Biomarker Factory, and of the town’s new biotech economy writ large?

Wilson talks about her story on Hear and Now, produced by NPR and WBUR-Boston.

She also appeared on The State of Things, broadcast by WUNC and produced by North Carolina Public Radio.