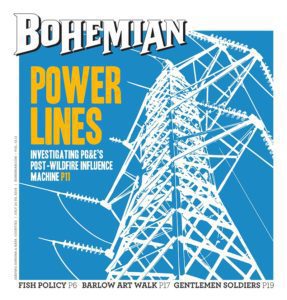 “Juiced,” a report by Will Carruthers and FIJ grantee Peter Byrne, looks at how California power giant PG&E  oiled political machinery after the 2017 and 2018 California wildfires that killed more than 100 people and caused vast destruction in residential communities. PG&E was found responsible for the most lethal fire and is implicated in others.

It is part of an investigative series by the North Bay Bohemian, a Northern California news site. The series called “The Power Brokers” focuses on the nexus of power, money, media, and politics in Sonoma County. A previous story, “Graton Expectations,” revealed how lobbyist and local media magnate Darius Anderson defrauded an Indian tribe that was developing a casino business.

Artwork by the North Bay Bohemian