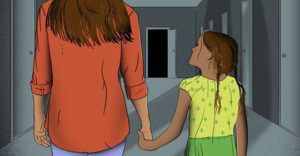 Journalist Suman Naishadham, writing in VICE, reports on the first federal prosecution of a female genital mutilation case in the U.S., and traces the surprisingly vexed history of the tradition here.

The case has reignited a longstanding debate over what constitutes the practice and how best to handle it. Secrecy around the issue in America means there is little data on it, and there are few arrests. In 2016, the Centers for Disease Control and Prevention estimated that around 560,000 females had undergone or were at risk for genital mutilation.

Illustration by Lia Kantrowitz for VICE