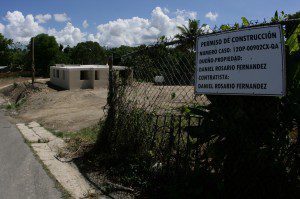 Journalist Eliván Martínez, reporting for the Center for Investigative Journalism in Puerto Rico, discovered a scheme by the City of San Juan to illegally collect money from property owners under the false pretense that it would be used to conserve green space.

At least 648 private parcels, comprising nearly 3,000 acres in the southern green belt of San Juan, are crucial for the preservation of water resources and preventing floods in the capital of the Caribbean island. Nevertheless, at the beginning of former mayor Jorge Santini’s administration, these parcels were being developed at an alarming rate. Therefore, in order to allegedly ‘preserve’ this green area, the Santini administration imposed a secret tax on San Juan citizens, including on poor people, who asked for construction permits. After analyzing aerial pictures, conducting interviews and visiting the area, the investigation demonstrated that the destruction path in those lands continued.

The Santini administration collected more than $20 million dollars in this way, after distorting the municipality’s Transfer of Development rights program (TDR).  Even though San Juan collected the “tax” associated with its TDR program until November 2012, this reporter’s investigation found that the 6,411 residential units available for sale under San Juan’s TDR program had all been sold as of 2007. Nevertheless, the municipality kept selling TDRs that didn’t exist, not only to those willing to build over the height limit, but to anyone asking for construction permits.

Meanwhile, the owners of the 648 private parcels (southern green belt of San Juan) who were supposed to receive the money in exchange for limiting development on their land never saw any of it. According to mayor Santini, the money collected under this program was deposited into a special account at the largest bank on the island, Banco Popular. However, this investigation revealed that this account is no longer active and the Santini administration has yet to provide answers on the fate of the money it collected under its TDR program.

After the publication of a series of news articles on the subject, San Juan’s new mayor Carmen Yulín Cruz, from the Partido Popular Democrático (the local non-statehood political party that favors the status-quo Commonwealth relationship with the US), has promised to conduct an in depth review of the municipality’s TDR program and to refer it to justice authorities in the event that indications of possible criminal activities are found that may warrant charges.