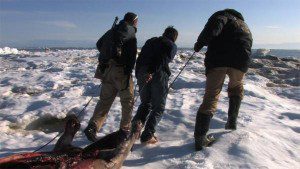 From Stephanie Woodard for Indian Country Today Media Network, a story of Native Americans coping with life-altering cultural changes in Alaska, which increases the risk of suicide, especially for teenaged boys and young men.

An excerpt from Woodard’s report:

The data shows that Alaska Native suicide occurs primarily among 15-24–year-olds. It’s also a recent phenomenon—rare until the 1960s, [scholar Lisa] Wexler says. By that time, mandatory-schooling regulations had forced the region’s traditionally nomadic people into sedentary villages. That altered life-ways and social structure, she explains. “For the first time, a sizeable number of young people were living together and were no longer an integral part of their family’s survival. Simultaneously, media and external influences grew.” Unemployment and lots of empty time exacerbated the difficulties of adjusting to the new life.

Men and Boys at Risk
Boys and young men have typically had a harder time coping with the modern Arctic than girls and young women, Wexler says. “Girls and women have generally been able to integrate traditional and contemporary roles. They know they’re valued for caring for siblings and elders and for having children of their own, as well as for doing well in school.” Males, on the other hand, often can’t afford to hunt, the activity that still defines manhood in the region. “It takes cash to hunt, for the snowmobile or boat, and for the gasoline to run them,” says Wexler.