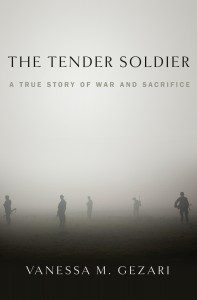 From Simon & Schuster,  The Tender Soldier: A True Story of War and Sacrifice, by Vanessa M. Gezari investigates the “Human Terrain System,” a complex military mission that aims to understand the enemy in Afghanistan.

From the book jacket: “What happens when the Pentagon sends three Americans to help carry out the most audacious experiment since Vietnam? On the day Barack Obama was elected president in November 2008, a small group of American civilians took their optimism and experience to Afghanistan, then considered America’s ‘good war.’ They were part of the Pentagon’s controversial attempt to bring social science to the battlefield, a program, called the Human Terrain System, that is driven by the notion that you can’t win a war if you don’t understand the enemy and his culture. The field team in Afghanistan that day included an intrepid Texas blonde, a former bodyguard for Afghan president Hamid Karzai, and an ex-military intelligence sergeant who had come to Afghanistan to make peace with his troubled past. But not all goes as planned.”

“Journalist Vanessa Gezari follows these three idealists from the hope that brought them to Afghanistan through the events of the fateful day when one is gravely wounded, an Afghan is dead, and a proponent of cross-cultural engagement is charged with his murder.”

The New York Times gives the book a favorable review and concludes: “.. over all, Ms. Gezari’s book powerfully humanizes the ways the counterinsurgency effort played out in Afghanistan. And it arrives at an important moment in the debate over the doctrine: as Iraq recedes in the nation’s rearview mirror, and a final withdrawal from Afghanistan looms, the military again seems prepared to shrug off counterinsurgency as a distraction.”