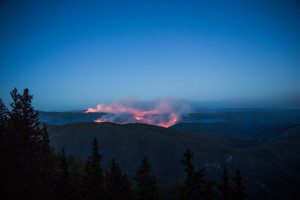 From Claudine LoMonaco, for the Sante Fe Reporter, an investigation of a national forest restoration project that “has gone haplessly awry.”  An excerpt: “[The initiative’s] aim is to thin and restore 2.4 million acres along the Mogollon Rim in northern Arizona, an enormous swath of land on four national forests stretching from Flagstaff to the New Mexico border, and reintroduce the natural fire regime. The idea was to have a business do the work—because the government can’t afford to—and make a profit by selling wood products…”

“In May 2012, the Forest Service regional office in Albuquerque awarded the contract to an under-the-radar company from Montana called Pioneer Forest Products. But more than a year later, Pioneer hasn’t thinned a single overgrown tree, because it’s failed to attract any investors, and the project has stalled.”