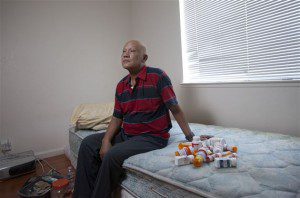 “As a soldier in the South Vietnamese army, Trai [Nguyen] gathered intelligence that helped American soldiers. He fought alongside the Americans and was exposed to the defoliants that are known to have injured them. But he’s excluded from the compensation and health care afforded to U.S. veterans for the same service-connected disabilities.

Vietnam War veterans in the United States, Australia, New Zealand and South Korea receive Agent Orange disability benefits through their governments. Canada has compensated citizens who were exposed to herbicides during prewar testing of the chemicals. The U.S. Department of Veterans Affairs has paid billions in disability benefits related to herbicide exposure to eligible American veterans.

In contrast, Vietnamese Americans who were exposed and are now sick — a group that includes both veterans and civilians — haven’t received a dime.” One reason: “For the most part, Vietnamese Americans, especially former South Vietnamese veterans, have not demanded redress for harm caused by herbicides. A strong anti-Communist streak in the community causes some of its most outspoken members to view the dangers of Agent Orange as a Communist hoax.”