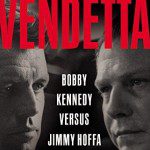 From James Neff, an investigation of the battle between Bobby Kennedy and Jimmy Hoffa, waged during Kennedy’s time with the Senate Rackets Committee and later at the U. S. Justice Department where Kennedy assembled a “Get Hoffa” squad devoted to destroying Hoffa.

Neff’s book, published by Little, Brown and Company, is now on sale.

Neff was interviewed about his book on NPR’s All Things Considered.