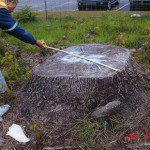 “Robert J. Barnhart was a crew chief for a billboard company, and a soldier in a war on trees. Trees were the enemy if they spoiled the view of a billboard. On days of an attack, Barnhart, 27, would arrive by dawn at Lamar Advertising Co. in Tallahassee, Fla. After removing the magnetic Lamar logo from a company truck, he would set forth with a machete, a hospital mask and a container of what he described as a ‘pretty gnarly’ herbicide.”

“According to records obtained by FairWarning under the Freedom of Information Act, expert reviewers have told the [Federal Highway Administration] that the study appears to have been botched. The key findings vary so wildly from previous research that, as one reviewer put it, they ‘are not plausible.’ …

“In the FHWA study, recorded glances were so brief that none came close to 2 seconds or even 1.6 seconds. Only about 1 percent were above three-quarters of a second. In fact, the average was slightly below one-tenth of a second—a number both expert reviewers considered almost impossible.

‘The reported glances to billboards here are on the order of 10-times shorter than values reported elsewhere,’ one reviewer wrote. ‘The pattern of results certainly raises questions over the quality and legitimacy of the underlying data.’

Said the other: ‘The data reported as average glance durations are not plausible.’”