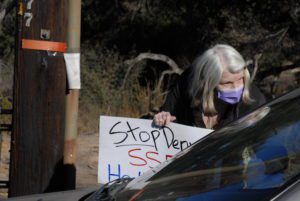 a series of reports for The California Report, Chris Richard investigated the long-stalled cleanup of the Santa Susana Field Laboratory near Los Angeles. He describes how NASA and the Department of Energy failed to fulfill their legal commitments to remove the contamination they and other federal agencies caused, including the radiation from a partial nuclear meltdown a half century ago. Richard reports that the environmental damage has yet to be fully addressed. A final segment examined similar regulatory failures by California’s Department of Toxic Substances Control.
(Photo by Chris Richard/KQED: Jeanne Fjelstad hands out a leaflet warning visitors to the Santa Susana Field Laboratory of remaining chemical and nuclear contamination.)

[Reporting for this project was sponsored by the Park Foundation.]