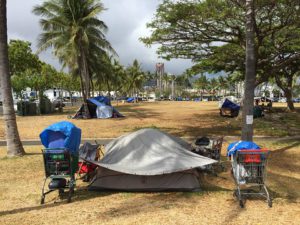 Hawaii has the nation’s highest rate of homelessness, with thousands of impoverished people setting up tent cities on sidewalks and along beaches. Many of the homeless are from the Pacific region of Micronesia, whose residents are allowed to live and work freely in the United States under a 30-year-old treaty. Hawaii has been the overwhelming destination of choice, and the state is struggling to accommodate these new arrivals. Aaron Wiener of Mother Jones provides an overview of the dire situation and how it came to be.