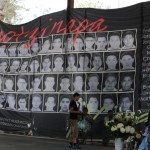 From Steven Fisher and Anabel Hernández for Mexico’s Spanish-language Proceso magazine, an investigation into the Mexican government’s role in the disappearance of 43 students after a clash on Sept. 26, 2014 in the streets of Iguala. According to the Huffington Post, the duo’s work for Proceso “contradicts claims by the administration of Mexican President Enrique Peña Nieto, which has repeatedly said the military was not in the streets of Iguala the night the students were abducted” and found “evidence that soldiers from the 27th battalion of the Mexican army may have fired at the students.”

[Reporting sponsored by individual donors referred by The Catalogue for Philanthropy – Greater Washington.]