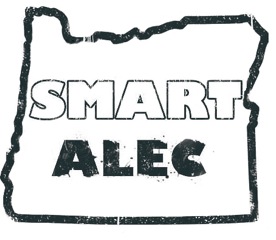 From the investigative team at KBOO Community Radio, Portland, an investigation of the influence that the American Legislative Exchange Council [ALEC] has on laws passed in the state of Oregon. KBOO reporters found that ALEC model bills are introduced, virtually word-for-word, to benefit the corporate-profit mission of ALEC, at the expense of consumer and environmental protection. The reporting team cited many examples, and highlighted two bills: one that requires homeowners who install solar panels to in effect subsidize electric utilities, and another that protects the Monsanto seed company from competition. The reporters also uncovered one legislator who was using ALEC lobbyists as his research team.

In addition to a series of radio reports, KBOO developed a website that displays the results of its investigation.

[Reporting sponsored by The Park Foundation and The Ethics and Excellence in Journalism Foundation.]