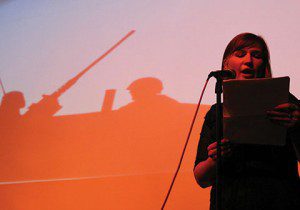 From Laura Kasinof for Washington Monthly, an article about the post-war grief that may impact women who have served in the military differently than men. An excerpt: *While it’s clear that war is hell for everyone, men and women alike, it’s unclear how the unique female experience in the barracks, on the battlefield, and back at home may affect them differently. Female veterans are already more likely than male veterans to be homeless, divorced, or raising children as single parents. Female vets under fifty are more than twice as likely as their male counterparts to kill themselves. And a growing body of research suggests that female vets may also be more susceptible than men to psychological disorders, including PTSD.*

*Sexual assault in the military may play a role, reports Kasinof: *Women in the military must also face “negative consequences for  reporting [abuse or harassment] or they may have to continue working with someone who has assaulted them, or they were assaulted by a commanding officer,” said Janice Krupnick, research professor at Georgetown University’s Department of Psychiatry, who works with female veterans.*